Pretty much smack bang in the middle of Queensland lays Idalia National Park covering just under 150,000 hectares and on a recent explore we found it holds significant amounts of history, endangered wildlife and remote camping options. There’s only one way in and out of Idalia so getting there is a pretty easy affair with a 115km drive south west of Blackall in central Queensland. Now before you attempt to visit the park you need to be confident in remote travel and camping and be self sufficient in all aspects as there is no mobile service out here and seeing another camper just may not happen. The all dirt drive towards the park will have you skirt around the eastern side through large pastoral stations including Collabara Station which is now Southern Idalia until you enter the park. 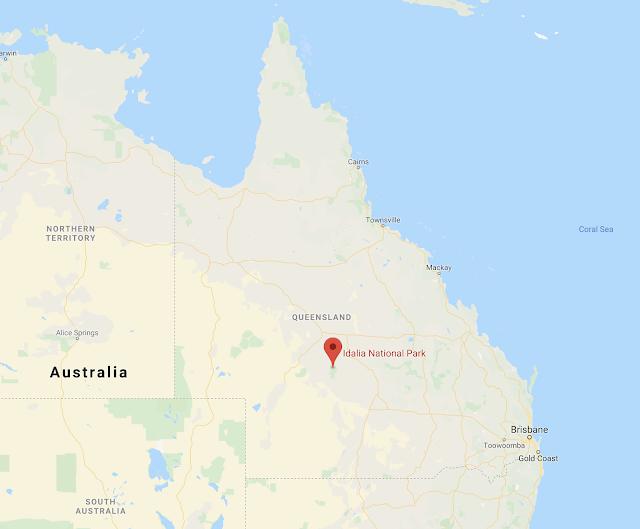 Jump back to 1919 when Herbert Golding decided it was a good move to purchase 45,000 hectares here and moved his wife and three children to this harsh environment to create a lifestyle. The early years saw them survive in a tin hut as they struggled through droughts, wild dogs, termites eating his fences and then the infestation of prickly pear. 1924 saw Herbert move away during the severe slump in cattle prices but early 1930 he returned after he managed to secure loans for a ‘proper’ home, more stock, a vehicle and miles of netting to keep out the wild dogs from his stock. Unfortunately in 1933 during mustering a rouge bull knocked him off his horse and he died from severe injuries, his son George took over until 1940 when Collabara was sold. 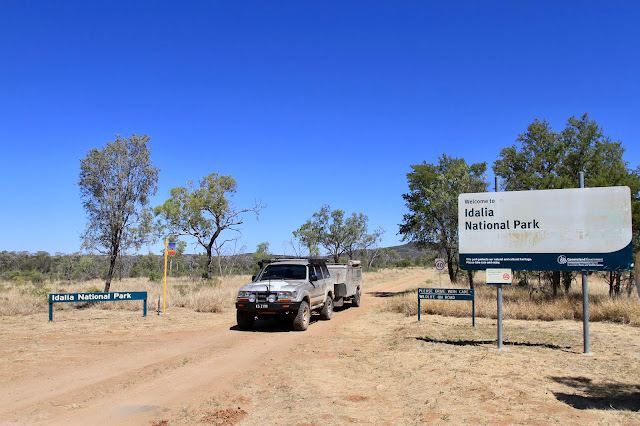 In recent times ( 1990 ) Idalia NP was formed by combining two pastoral leases - Collabara and old Idalia as they were originally part of the huge Terrick Terrick property of Blackall region.

Today there are many relics around the park where it embraces part of the Gowan Ranges and neighbouring plateaus. From the parks entrance its not far to the first set of ruins that include the windmill and tanks, old bores and heritage listed stake fences. Monks tank is the only designated camping area in the park and its a 23km drive across open Mitchell grass plains, through Mulga woodlands on sandy tracks, best with a high clearance 4wd. Along the way if you’ve got the time take the turns and explore Old Idalia where once stood a slab hut which was used as a remote mustering hut. Current reports told us it was still standing but unfortunately there’s only a pile of timber, corrugated iron and a few bits of rusty relics scattered on the site now. A walking trail behind the ruble leads you to wave rock where over hundreds of years of weathering has worn away the soft sandstone rock leaving a huge 100 metre long wave shaped rock which for most parts look like a surfing barrel about to break. For the surefooted wanders trails to the top give stunning views across the surrounding areas of the silver leafed Acacia Trees. 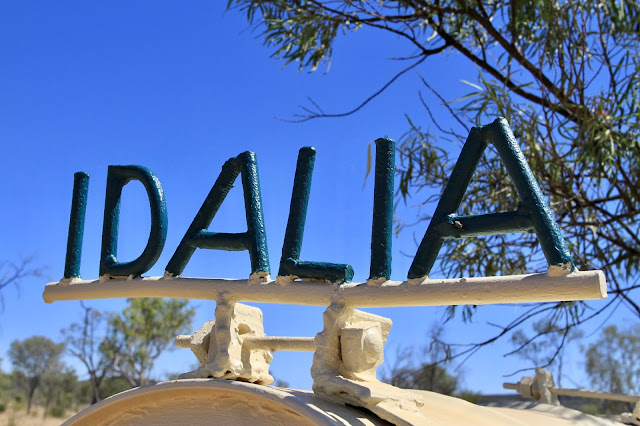 Other stops along the way include more stake stockyards and junction hole which is a great stop to watch for birds and several types of Wallabies. If your around during dusk you might see the endangered Nailtail Wallaby that once over populated this area until hunters nearly wiped them out prior to 1930. A nearby reserve has been setup to raise and monitor these animals. Reading the info boards QPWS report there are 6 different types of Wallabies ( or Macropod’s ) within Idalia, and they have adapted well to this area by not needed much water to survive. During drought they are not fussy when eating as they are happy to mix their diet between leaves, grass, bark and other animal droppings. 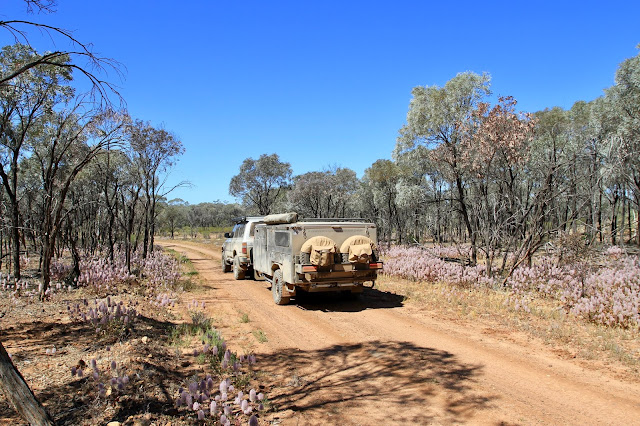 Monks Tank waterhole is very basic with no allocated camping areas but does have a decent long drop dunny all within a thick Mulgawood forest, it’s a great base to setup for a few days to explore the other reaches of this remote park. Near camp with a short walk away there are two water holes that are a haven for what seems like dozens of varieties of birds especially at sunrise and sunset. Bird-lovers have reported an array of different parrots, finches, robins and bellbirds. While not an expert bird spotter we did see about a dozen different types and tiny marsupial foot prints around the camp each morning in the red sand.

Heading out from Monks there are several areas to explore into more remote regions of the park and with only one road to follow its a no brainer. 10 km away from Monks is Rainbow Gorge where you can walk along an old creek that has been eroded away showing a mass of different coloured sandstone coloured rock. Water through here flows fast and furious tumbling over huge drop-offs gouging out more soft substance exposing hard rock. Even in dry times, colours shine in different light and its a nice surprise in this harsh environment. 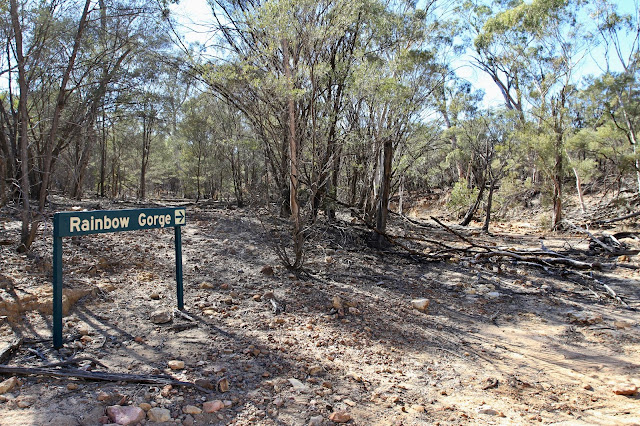 The next stopover is Murphy’s Waterhole where a narrow gorge has been weathered away over time surrounded by huge gums and we read that this spot is one of the most inland places Koalas can be spotted, but unfortunately we saw none during the gorge walk. Gnarly Red Gums give shade to the deep gorge and we are sure in the wet times that it can be a spectacular sight seeing water flow gracefully through these sections.

The roads out here change between long sandy straights into rough little pockets of rocky undulating creek crossings, and considering where this park is the change is unexpected. A rough 12km away is Emmet Pocket, which is a favourite for photographers and hikers as the views across the Mulga Plains are to die for. The walk from the carpark to the cliff line is a difficult and rough 3 hour hike but is a must if you make the effort to explore the outer regions. Last but not least is Bullock Gorge which is a 30 minute drive to the east from Emmet Pocket. Again this walk is for the most experienced due to the steepness of the track along craggy escarpments where different layers of the Mulga Trees and Acacia woodlands look like a huge map in the distance. In the distance some 100 million years ago it was the sea bed of ancient oceans. The remoteness of Idalia might not appeal to most but for nature lovers it should be on the list. Native Fuchsia shrubs give a blush of crimson colour when in bloom and petite paper Daisies flower at any sign of moisture in the air. 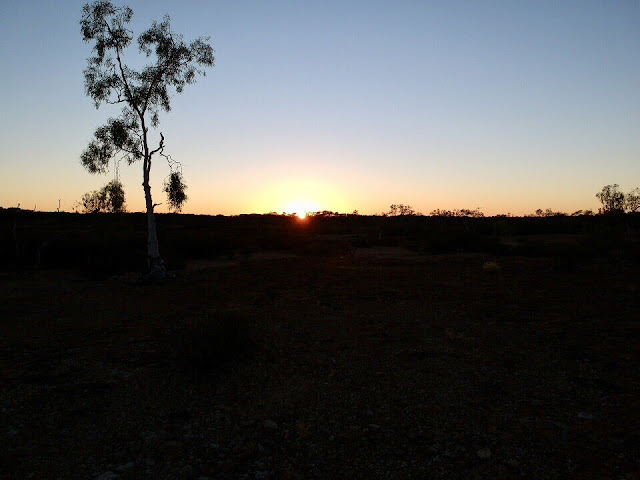 Queensland parks allow mountain bike riding on the designated trails within the area, but common sense should prevail and only cycle in the cooler months plus carry plenty of water.  We spent a few days here and saw no other soul so don’t depend on anyone else for help, Idalia is a seriously remote park. With this there are no bins and no drinking water is available, be on the lookout for any park warnings and don’t forget your fuel supply as the nearest fuel of any sort is 115km back at Blackall. Exploring here in the cooler months between April and September will give you cool nights ( and hopefully no fire ban ) plus warm days to enjoy the whole area. Even though you probably won’t see another camper in Idalia for days, bookings must be done online before you head to the area and mobile service is non existence for miles which can and is bloody frustrating. 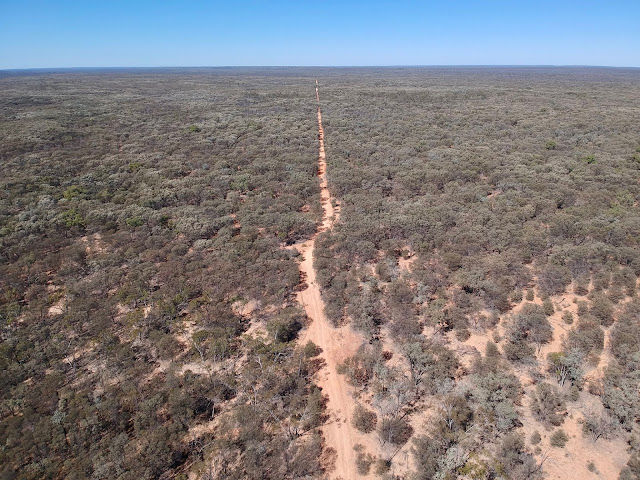 Idalia is the perfect place to capture the essence of harsh remoteness in central Queensland but it’s still a fragile environment where we need to look after the history as well as its flora and fauna. It’s a place to get back to nature wether it be hiking, taking photos or maybe just to relax. Heading into Idalia is a great journey for its isolation and getting off the beaten track where you can savour the freedom of the outback. 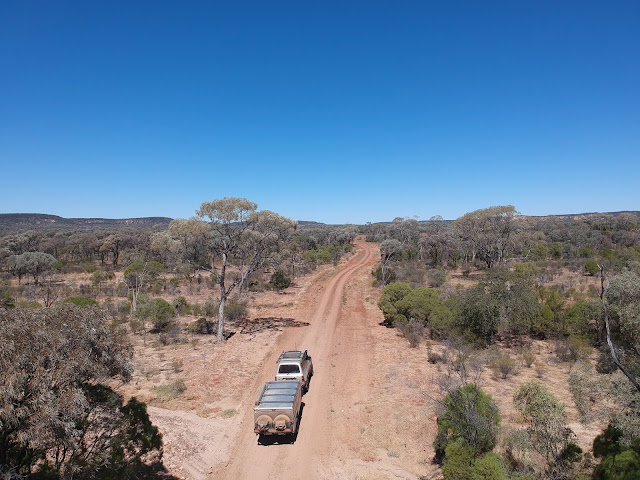 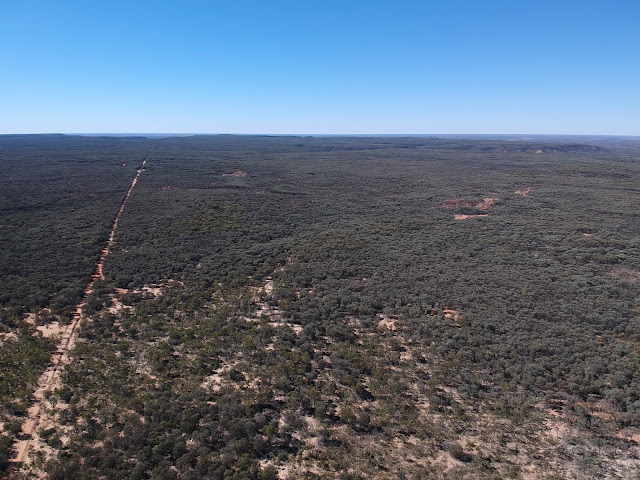