Kempsey on the north coast of NSW is known as the home of the Akubra hat and the where Slim Dusty was born at nearby Nulla Nulla. But what if there was a hidden getaway that was camper trailer friendly, easy on the pocket and you could do as little or as much as you wanted? Tucked at the base of the Great Diving Range some 90km west of Kempsey lays Georges Junction, where 2 water ways meet allowing for some time out from the hustle and bustle of the busy coastline. This destination can also be used as a stop over point if travelling between the tablelands and the coast.

After picking up last minute supplies at Kempsey, head westward towards the hills on the Armidale Road which will see you pass the old historic cemetery. The first 50km will let you wander past hobby farms, several small state forests and through several localities. Unfortunately this is a 4wders nightmare being a sealed road, but hopefully you will start to wind down and let the stress fly out the window. Willawarrin is the first small country town that you need to slow down in, here you will find the basic facilities from the general store, limited fuel supplies and a good old pub. Leaving here it is another 30km to the next town of Bellbrook. Between these two towns the road narrows down as it rises and falls over several small ranges giving you views across valleys towards the wilderness areas of the Wild Oxley National Park and glimpses of the Macleay River as it starts to follow the road westward. Arriving at Bellbrook the first thing you will notice is the historical nature of many of the buildings. Bellbrook was settled around 1883 by timber cutters looking for red cedar trees, which was known as red gold back in its day. Not much happens at Bellbrook these days, the general store runs on gentleman’s hours ( but make sure you try one of their yummy home made ice creams and pick up a jar of 100% pure honey), the pub offers great meals with an icy beer and there are toilets available in the local park- that’s it !! ... Bellbrook at its best.

The fun part starts just out of Bellbrook as this is where the tar ends and the dirt starts- finally!  For us 4wders this is our country and what we live for.

The road will soon start to twist and wind its way up and over some pretty serious hills so take extreme care as there isn't a lot of room to pass or to be passed.  These sudden rises house small pockets of thick rainforest that is slowly being overtaken by lantana and other vicious vines. We chose to drive this road with our lights on as there were a few sections where it got extremely narrow with a rock wall on one side and a nice 100 foot drop on the other and in case we came head to head with traffic from the other way. Rock falls have made travelling on this road hazardas, so take care and ahede to any warning signs that may be in place. Caravans are advised not to use this road for this reason and the twisty nature of this connecting road to the tablelands. Apart from a few large properties, the country side was pretty much scattered timber country. As you wander along beside the Macleay River it is evident that floods are frequent as there are large sections of gravel at many of the bends in the river below. At the 80 km mark you will encounter lower Creek, a nice spot to pull over near the creek for a cuppa and to stretch the legs. Definatly no services here, even though there is a 2km tar strip.

Georges Junction lies just 10km up the road, the first sign of this area will be if there are any other campers down beside the river on a section called ‘The Point’. If not- lookout for ‘The Bass Lodge’ on your right. The Bass Lodge offers fishing stays for those looking for adventure chasing the mighty Macleay River Bass.

Pulling off to the left here will see you face will several camping options. Suitably named ‘The top area’, is a very large flat grassed area which overlooks the river below which has several large gums for shade, and an added bonus are the pit toilets here. Dropping down to the lower section you have several site choices which has direct water access, great for those who love their canoeing. Also tucked around the corner is ‘The point’, a large private area under a mass of Casuarina trees- great in the summer months.
Most of the activities here revolve around the water, from canoeing, riding the rapids, fishing and swimming. There are plenty of swimming holes here that are safe for the kids but always best to give them your full supervision if they are kicking around the waters edge.

With no facilities here (are pit toilets really facilities?), no phone service and having to be self sufficient- you could nearly rate this as remote camping! After setup and kicking back for a while, you will start to notice just how small and insignificant you are here. Look around and look up. Some of the surrounding peaks rise some 1000 metres around you, but just remember you are now at the very base of the Great Dividing Range and the upper reaches of the Macleay River. If you are lucky enough to take a canoe along, paddle upstream and be awe-inspired by the massive rock walls and the peaks that seem to scream toward the sky.

Georges Junction lies on the path of ‘The Bicentennial National Trail’. This Trail runs from the states North to the South. Giving bushwalkers and horse trail riders the freedom to pass through pristine and remote country side areas along a designated trail. The camping areas are located on a Travelling Stock Route which at any point of any given day or night will see cattle or horses freely wandering around, and the added bonus of this declared area is that the camping here is absolutely free, no more to pay- NO FEES!!. Dogs and Fires are allowed here, you just need to collect your own wood from the surrounding areas- this place just gets better and better.

We settled down for several days here recently and it was after this that we decided to tackle the ‘River Drive’, a 10km drive upstream along the mighty Macleay River. This trip needs to be taken with care as there are some 6 river crossings with various degrees of difficulty, defiantly low range country.
The river levels change up here quite often, so if unsure walk the crossings first. Defiantly the wise thing to do first is to lower your tyre pressures as the river rocks can get very slippery under foot. If all goes well this track that heads south from the lower camping grounds will take around 90 mins each way. The very end of the track will put you on top of Peachtree lookout, which is a spur that over looks West Kunderang Station- a National park farm stay set up. This is a great day out where the 4wding isn't over challenging; from long grassy tracks to several small rocky sections you just need a level head at the water crossings.

If attempting this drive; keep a look out for flood debris that may be high up in the adjacent trees, it will show you the force of mother nature out here in this huge catchment area of the upper reaches of the Macleay River.
With several days of recharging your body batteries, the option is now wether to head back to the coast or head further up the mountain for more adventures. We decided to head further up. Locals call this ‘The Big Hill’, as now you will climb from around 150 metres above sea level to around 1055 metres above sea level into the cool climate of the Northern Tablelands. Leaving Georges Junction the climb up is exhilarating; with a drop beside the road several hundred metres to one side and solid rock walls on the other, there isn't much room to move over. Passing through Cunnawarra National Park the vegetation changes to a temperate mix of tree ferns, tall white gums and a range of pines. The views along this road are nothing short of fantastic giving you a birds-eye peek at the shear size of these peaks. At the top of the range a great spot to pull over for a cuppa is at the old State Forest Loggers Camp which is located with plenty of parking, where the kids can get out to blow off some steam. Get them to find the old log dray under the front trees, takes the pressure off you as you sit down with a bickky and cuppa.

The road starts to improve from here as it rolls down through scattered timber forests and sparse paddocks. If you really need to look, phone service can be had here allowing you contact with the outside world. Farms start to make an appearance, with several small sections of tar and a one way bridge as you cross the Styx River soon let you know that civilization isn't too far away.

Unfortunately the dirt soon gives way to our dreaded friend, a tar road. Farms become more prominent and this leads you to the main route that runs between Armidale and Grafton; giving you another option. Do we turn around, turn the phone off and head back down the mountain? or maybe head north or south to another destination ?.
Georges Junction is a great getaway that is camper trailer friendly, fairly remote yet easily accessible from either the coast or tablelands. 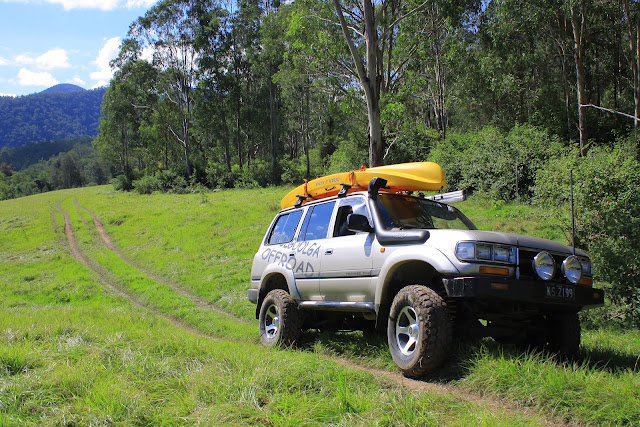 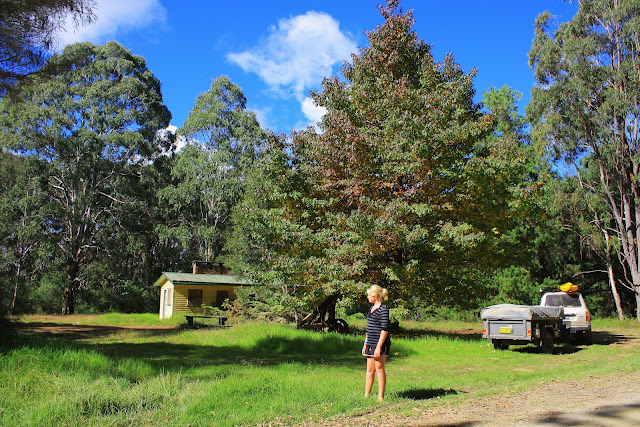 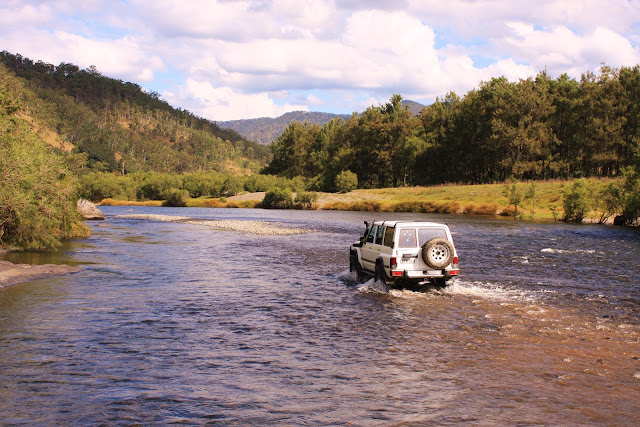 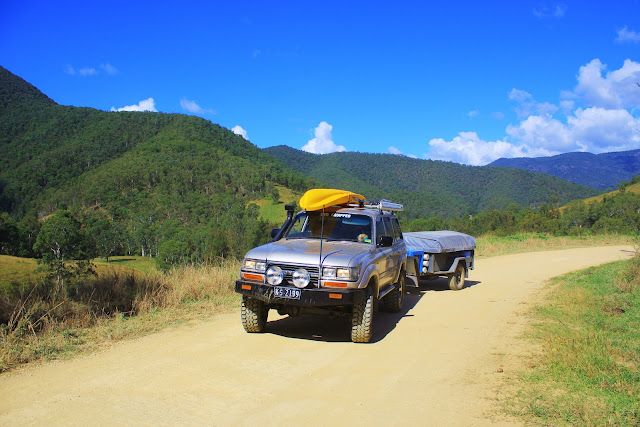 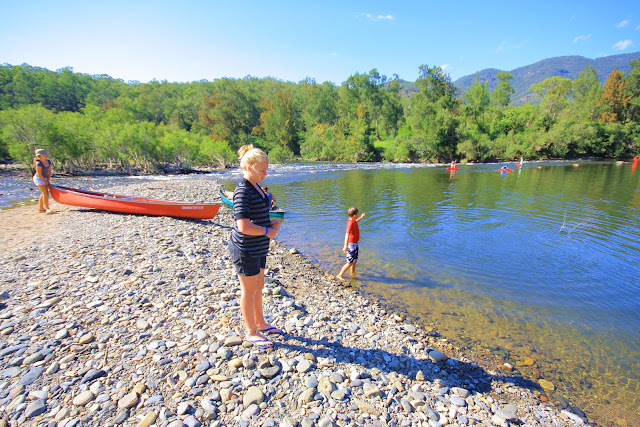 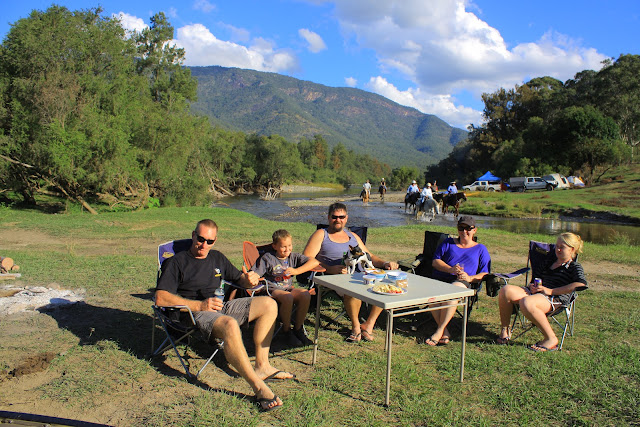 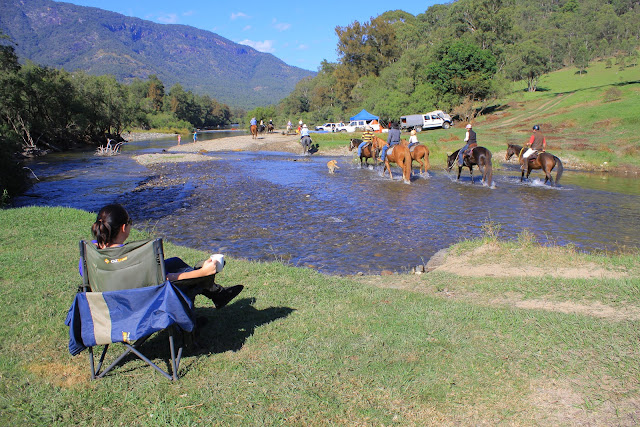 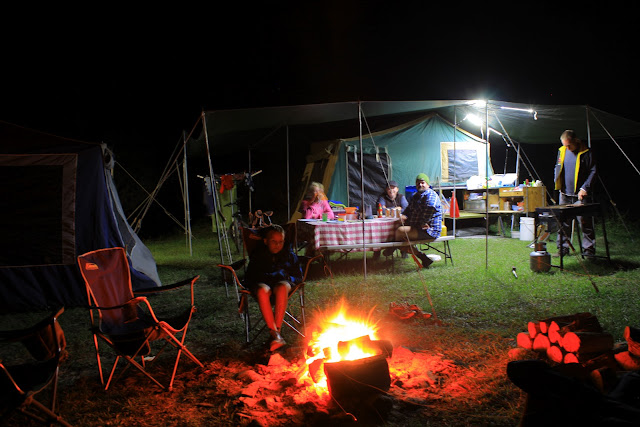 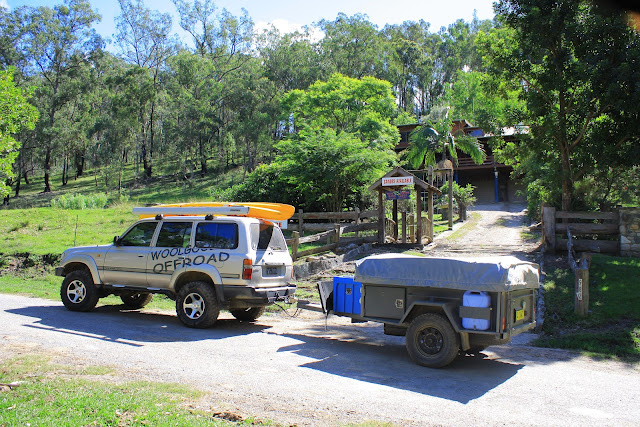 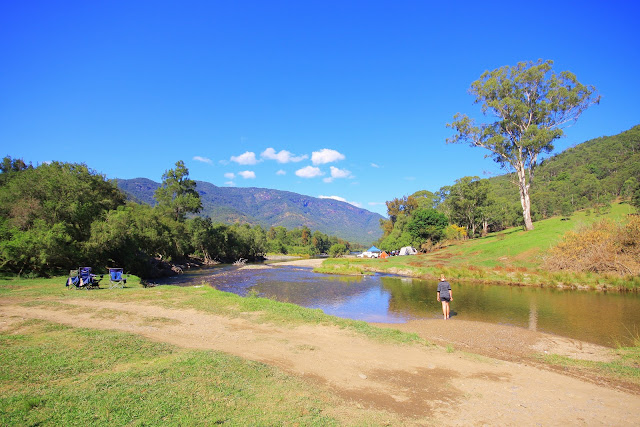 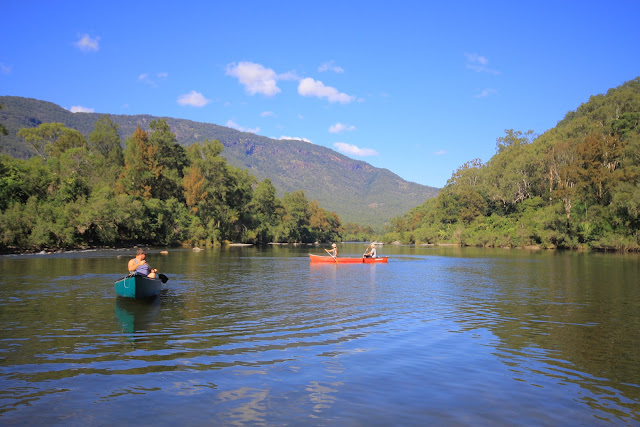 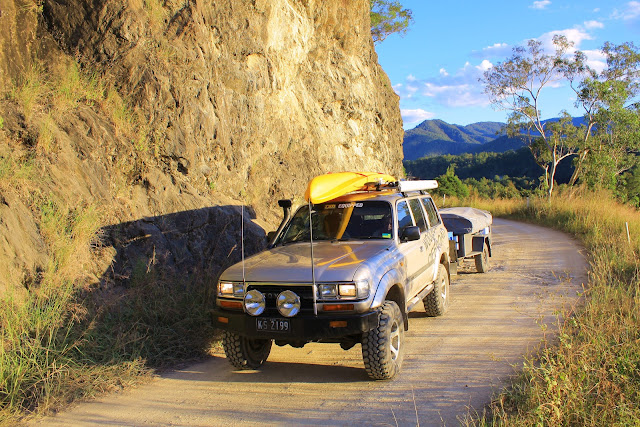 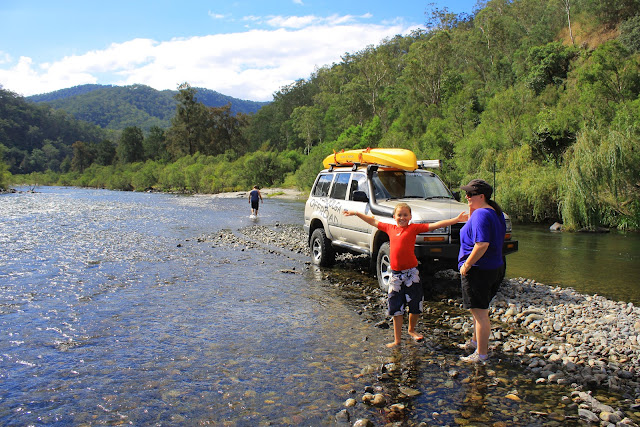 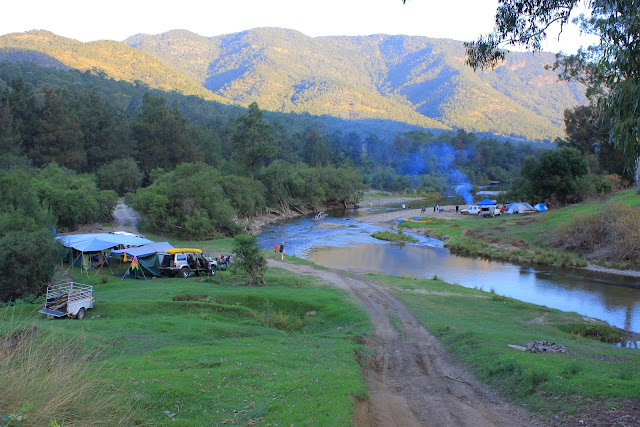 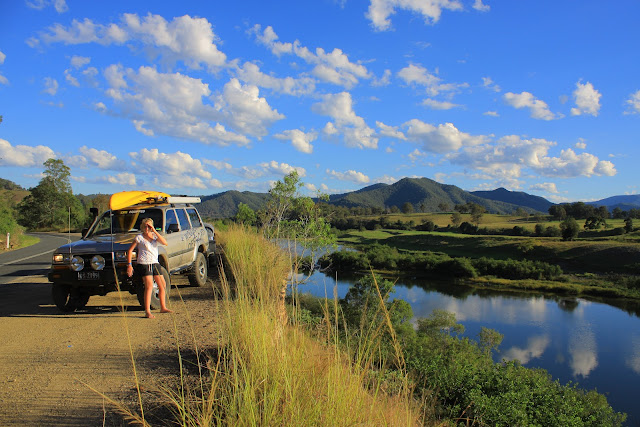 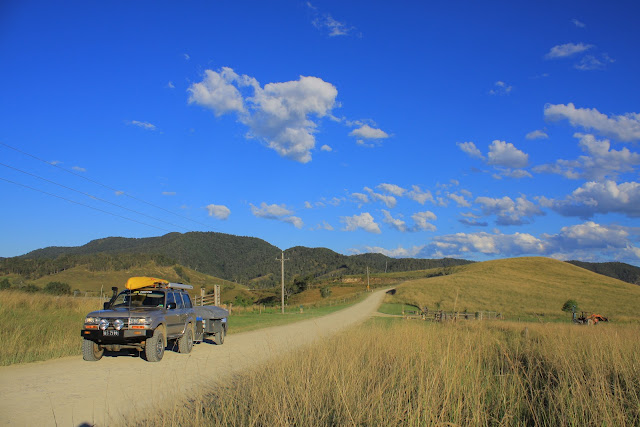